How much Weirder Can It Get?

Can I have an extra towel for the shower? Shower attendant, no you are only allowed one towel due to the virus.  Do what?

Only one family member allowed in the store at a time.  Had to laugh at all the men using Facetime to talk to someone else about choices of what to buy

We cannot get in the store unless we have a mask.  Many people had a mask around their neck. I did not see any with a mask over their eyes even though I was watching.

Gate guard that was hard of hearing

What is your name? Can you spell that?  After the fourth time (the truck was shut off) I leaned out the window to talk louder and he about fell down backing away from me.  Not sure if he ever got it right. He also could not get the pickup number right.

He came out to see what we were picking up and asked to see the load info.  After the guard’s reaction, I warned him the info was on the phone's email.  He came with I do not care let me look at the load, which he did and gave us a dock door to back into.

Funny how so many shippers and receivers do not have a pen to sign with.  They start to reach for our pen and then move their hand quickly as if they were burned and look for their own pen.

Some wear shippers and receivers wear them most do not.  Some people look at the paperwork standing next to us and others look at us as diseased and stand way back.

One location had a table with a gadget that was to be touch our forehead for a second and then removed.  The attendant gave specific instructions on how to do this and before it was over I had given it such an error they had to reset it. After many attempts, she finally determined I was normal.

Traffic was awesome for about two weeks and now it is as bad as ever.  Not sure where everyone is going as everything is basically still locked down where we have been traveling.

Overhead signs on the interstates

Warning us to stay home, to avoid social activities, and to avoid travel to save lives.

In about three months’ time, we have become accustomed to standing in lines 6’ apart, seeing masks on many people’s faces, and seeing people shy away from us if we are to close.  What do you think we will see in another three months? I hope we are somewhat back to normal. 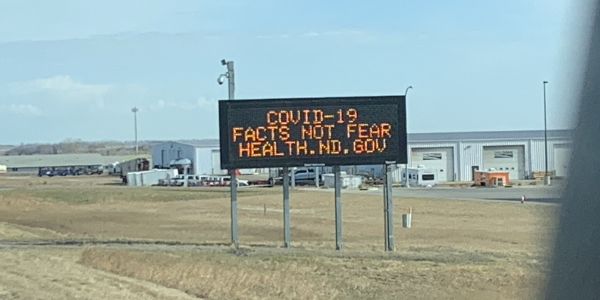 Without a doubt, 2020 will be a year to remember. Amidst all the trials and tribulations, it can be difficult to find th...