Recent crash data from the NHTSA (National Highway Traffic Safety Administration) for 2018 has shown a slight increase in trucking fatalities over 2017. Well, that depends on where you read about it or how you define slight. Some sources report the increase as being “the highest level in 30 years”. It only stands to reason that as more vehicles, cars and trucks, are on the roadways everyday, more interactions between them will occur, thus resulting in higher numbers of crashes and fatalities.

There are many contributing factors, but I am sure we will hear from the anti-ELD crowd on this. Among some groups and some drivers, the ELD has become the “catch all” to blame for many of the issues in the trucking industry today. Everytime reports are released showing the number of crashes, traffic citations or failed inspection rates, the ELD gets the blame.

While a small percentage of issues with truck drivers can be attributed to the ELD mandate and the ELD devices themselves, overall, the ELD mandate has just brought some issues to the surface that were here all along even during the paper log era.

There is nothing inherently evil about and ELD or the ELD mandate, it is the same HOS (Hours of Service) that were present all along, only now they are recorded automatically with less editing options.

Truck occupant fatalities may have increased slightly in 2018 over 2017 (it was only up by 7, not 7 %, just 7), while pedestrians and pedalcyclists fatalities showed much larger increases.

Our industry tends to focus on the negatives and while one death is too many, all fatalities can not be eliminated.

The number of fatalities in crashes involving “large” trucks has increased but it should also be pointed out that the criteria for “large” truck, as defined by NHTSA, has been modified since 2016. 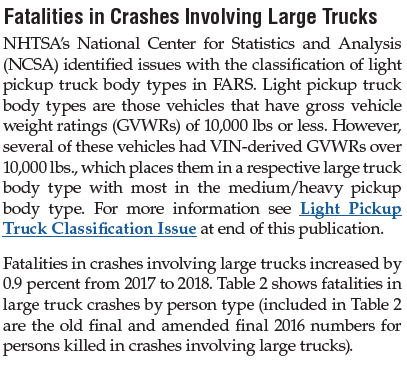 There is not one single cause for the crashes and when reviewing the articles about the data, or reviewing the data itself, it is imperative to understand the criteria that was used to derive those numbers.

Be safe out there.

Expediting can be as crazy as riding the wildest roller coaster you can imagine and not knowing when you will get back h...

So many events happened in 2020, it was a year like no other. Of course, the big event was the pandemic around the world...