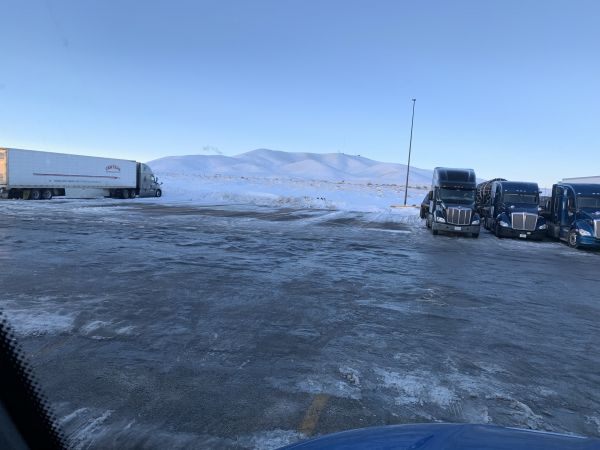 During a recent cross-country trip, I stopped at the Rawlins TA to fuel and take my ½ hour break. In time I was wondering if I might be taking an even more extended break due to stuck trucks. I easily parked and then looked to my left and saw a truck that was stuck on the ice, totally blocking the exit path. I figured they would put chains on and move, so I continued with my break. I knew that I could deploy our Onspot Automatic chains and should not have any problem driving on the ice.

First things first, I took Texas our German Shepherd out, and that is when I realized just how icy that parking lot was. I slithered over to the snow area and then had to slither my way back to the truck as Texas danced alongside me having a blast. The truck was still stuck, blocking the exit.

I got back in the truck and watched as another truck came in and tried to park across from me and could not get a grip on the ice. About this time, three parked trucks decided to leave, creating an opening for other trucks to go out the entrance through the fuel islands. The truck that could not get parked also exited this way. Now came a set of double, and I could see on this driver face a growing concern, and then they noticed the area where they could leave out the entrance. The truck was still stuck blocking the path and no sign of a driver trying to fix the problem.

This is one of the few times I have watched the time count down as I worried that someone would slide and block me in. With a minute to spare, I slowly moved the truck forward and towards the entrance to escape through the fuel islands going the wrong way. At one point, the truck slipped a little, and I had my finger poised to deploy the chains, but the truck found traction, and we continued forward.

When I left, this truck was still stuck, and I believe the driver was either waiting for spring thaw or possibly he had broken something. Not sure as I was not waiting around to find out. I was thankful that my stress was not about me getting stuck; it was about other drivers blocking my path. The streets were fine, and the interstate was completely dry, the only problem was in this truck stop that had several inches of ice.

Once again, I am thankful for our automatic chains as Bob was able to peacefully sleep through all of this drama with no worries of having to throw iron.