Everyone knows the rule, never swerve to keep from hitting an animal. When the animal is large and possible using the brakes hard while controlling steering is a good idea.

This morning I tested the theory and escaped unscathed but with Bob in the sleeper getting prepared for a crash.

I pulled out of Sparks, NV, headed towards Sacramento at three in the morning local time to avoid traffic and have a nice leisurely trip over Donner. The weather was excellent, and the roads were clear. Traffic was very light, and it was easy going. When possible, I used my bright lights, and that is what gave me enough room to save an animal’s life.

I had crossed the peak and headed down towards Sacramento, and the suggested speed was 50 mph. When going down a hill, I set my cruise at five under the posted speed limit and let the truck use the compression brake control my downhill speed. I was going about 45 MPH when I saw something dark move in the road up ahead, and I immediately thought HUGE black dog, and I touched my brakes. Then it dawned on me, that is NO dog that is a BIG bear that is running for its life. The bear swerved into my lane as he could not cross the jersey barrier, and I by that time was applying the brakes harder and at the same time was say Oh No, OH NO, OH NOOO. Things happen fast, and I had checked my mirrors and knew I was all alone, so there was no problem with someone rear-ending me as I applied more brake.

That bear was running as fast as he could run, and I was doing everything I safely could do to make sure he lived to see another day. The last I saw of the bear was me clearing his rear end as he headed back into the forest. I was SO glad for both of us that I did not hear the sound of metal bending, plastic breaking, or feel a terrible bump as I ran over him.

My heart was pounding with adrenalin as that was the first wild bear I have saw, and I was very thankful I was going down the mountain slow, was all by myself, and that we both lived to tell the tale.

After I parked and Bob woke up, he asked about the brake check and did I have a story for him. 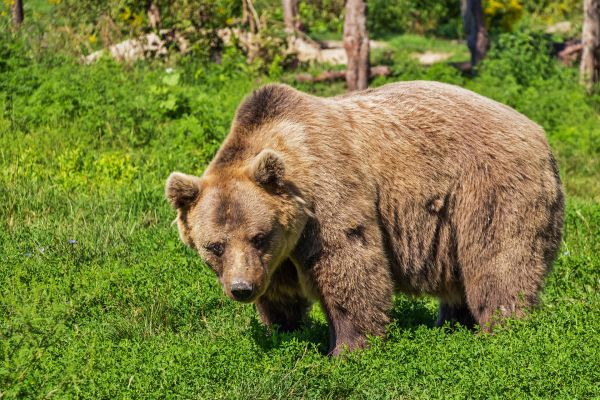