Offline
Nothing else to say. That's messed up.

Owner/Operator
Offline
Can't say I've seen a game like that before.
Definitely not a shining moment for the NFL.
#DisgracefulGame

Staff member
Owner/Operator
Offline
Most Steelers/Bengals games are more or less like this one. They've had a pretty heated rivalry since the 70s, but it turned bitter after the infamous 1983 incident when Keith Gary facemasked Kenny Anderson and turned Anderson's helmet all the way around causing Anderson to miss the next three games. And it got ugly with the 2005 playoff game when the Steelers tore up Carson Palmer's knee and some of the Steelers players laughed and joked about it after the game, and after one of the Bengals used a Steelers "Terrible Towel" to spit shine his shoes and then wipe his ass with it on the sidelines during the game. Recovering from his injury, Carson Palmer stated in a Sports Illustrated interview, "I hate the Steelers more than I hate UCLA." (He went to USC) Things have been at full boil ever since.
You know how we're supposed to have a hard hat for expediting? This is mine:

Ah, the Bengals-Steelers...
Vontaze Burfict and Packman Jones commit 30 yards worth of personal fouls, on the same play, that ends up deciding a playoff game.

Pacman Jones' personal foul was for shoving a former player who hasn't played in the NFL since 2011. Why was he even on the field?

Big Ben gets carted off the field for like the 4th time this year before yet again returning to the game suspiciously quickly.

Bengals slam the door on the Steelers with a Landry Jones INT, followed almost immediately by the Steelers slamming it right back with a Jeremy Hill fumble.

Steelers Offensive Line coach, Mike Munchak, a member of the NFL Hall of Fame, by the way, got flagged for a personal foul for pulling the dredlocks of Vontaze Burfict.

After Vontaze Burfict was downed after intercepting a pass, he got up and ran the ball into and out of his own end zone, and up the tunnel towards the locker room. No one knows why.

An after-touchdown celebration penalty was enforced, despite the touchdown being overturned upon review. Huh?

Marvin Lewis decided to punt on 4th-and-3 from the Steelers 38. What?!? 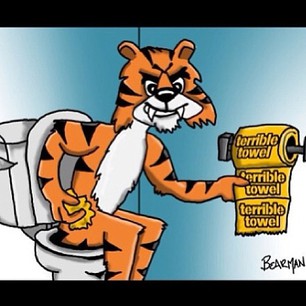 Staff member
Owner/Operator
Offline
You know, I had a feeling that the "Punch Women in the Head Night" promotion at Paul Brown Stadium was probably a bad idea.

Offline
The refs should have picked up the flag(or not have thrown one)on the Jones penalty. Assistant coach Joey Porter shouldn't even have been on the field. They shouldn't let the playoff game be determined on a questionable penalty with both teams jawing at each other.
Shazier did use the crown of his helmet on the Bernard hit. A penalty that would have given the Bengals 15 yards and negated the fumble. Bewildered that neither tv announcer nor their tv referee analyst Carey didn't even mention or consider that a penalty.
Having said all that...Hill, you CANNOT FUMBLE THE BALL right there. Your only function was to run forward with the ball (and secure it)and let the Steelers eat their timeouts.
Just a calamity at the end of the game.
Reactions: Turtle
You must log in or register to reply here.
Share:
Facebook Twitter Reddit Pinterest Tumblr WhatsApp Email Link
Top