Just documenting and requesting any advice.

In September of 2016 (1 year ago) I brought my truck into a local Freightliner shop for a PM service.

They recommended I flush and fill the transmission. I approved. Upon leaving the shop, I received a "CHECK TRANS" light in orange on the dashboard. I brought the truck back to the same shop, and they said it was due to the engine running rough.

I fixed the engine issue (injectors) so it was running smoothly but continued to have the CHECK TRANS light.

Occasionally, when starting the truck in the morning, the truck would not engage into "DRIVE" and a red, "RANGE INHIBIT" icon would light up on the dash. Just putting it back into neutral and trying again fixed that.

Last night, the orange dashboard indicator light for CHECK TRANS lit up and began to blink. (First time blinking) At the same time, my speedometer ceased functioning. (I was traveling up Interstate 5 at 55 MPH).

This all started when the shop recommended a PM service. I am really frustrated now because the transmission was functioning perfectly prior to them touching it.

I almost want the shop to replace my transmission as I feel it was their recommendation, but could the trans have been on its last leg anyway and the PM service just pushed it over the edge?

I searched my issue in the forums prior to posting and a poster by the name of Bobwolf had put up a questionnaire so I went and got the answers before posting. See below:

Also I have attached the invoices and photos. (Why would the dipstick recommend DEXRON III when TranSynd is TES-295 approved and apparently a better fluid? The shop used TranSynd. Could this have caused a failure?) 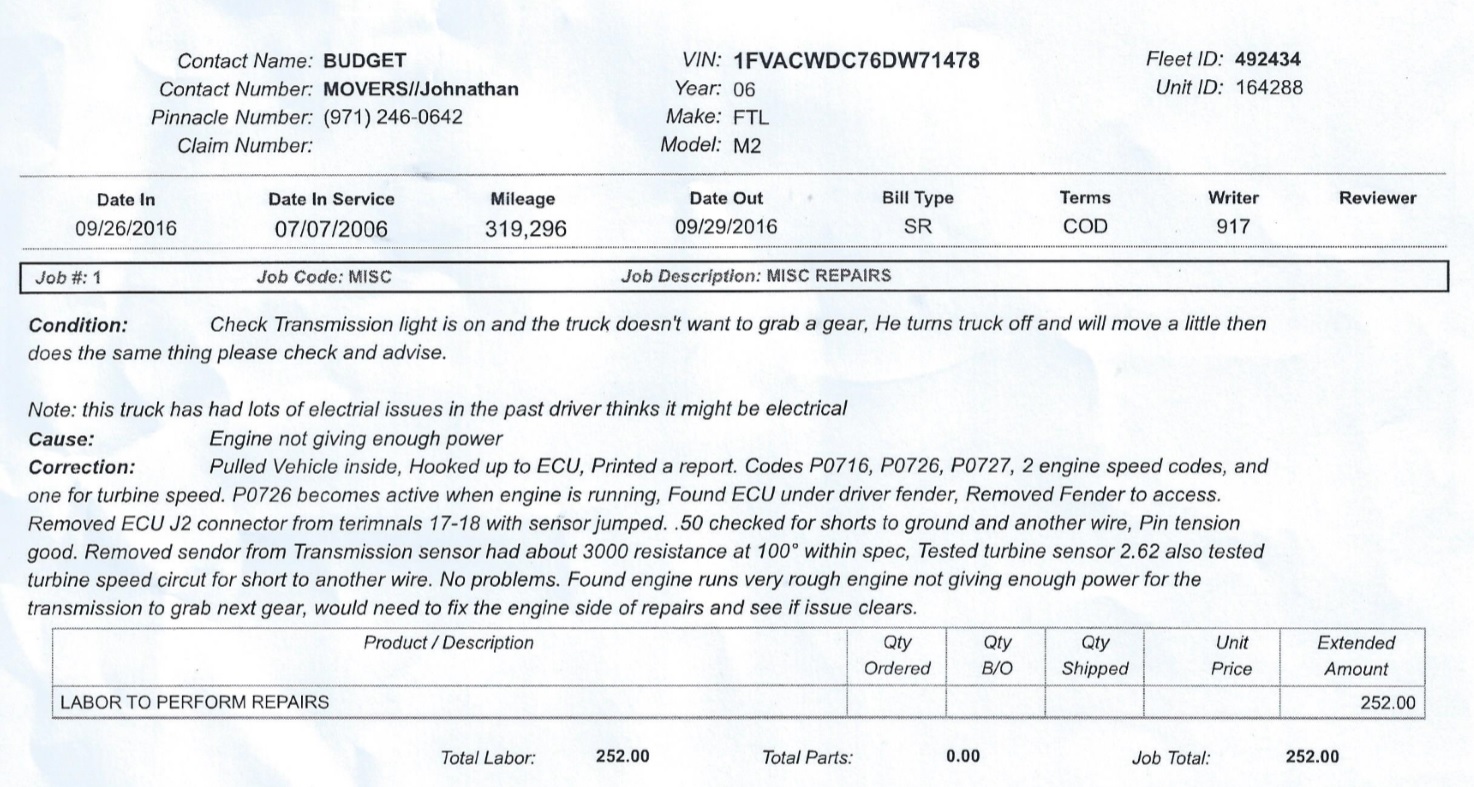 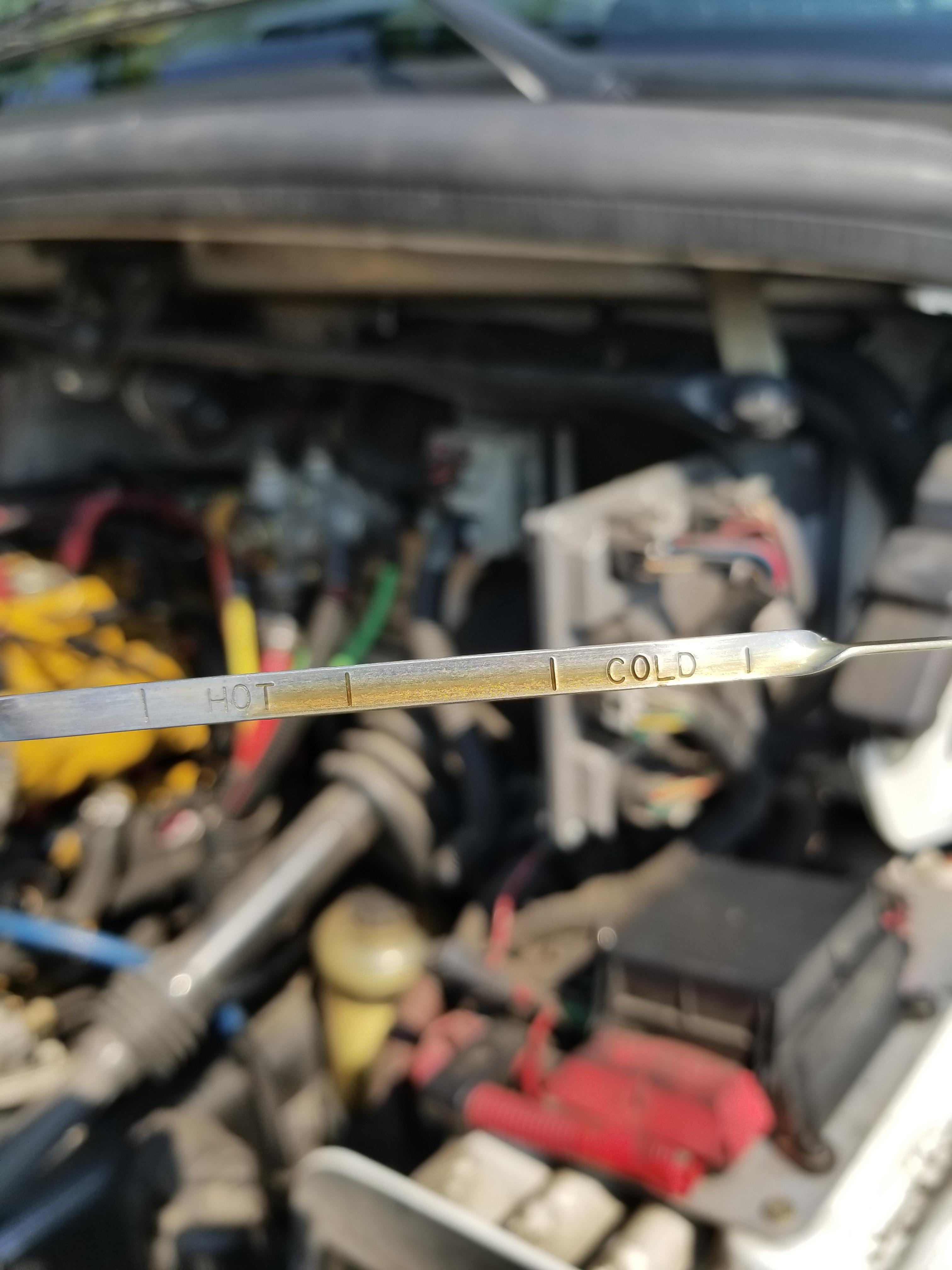 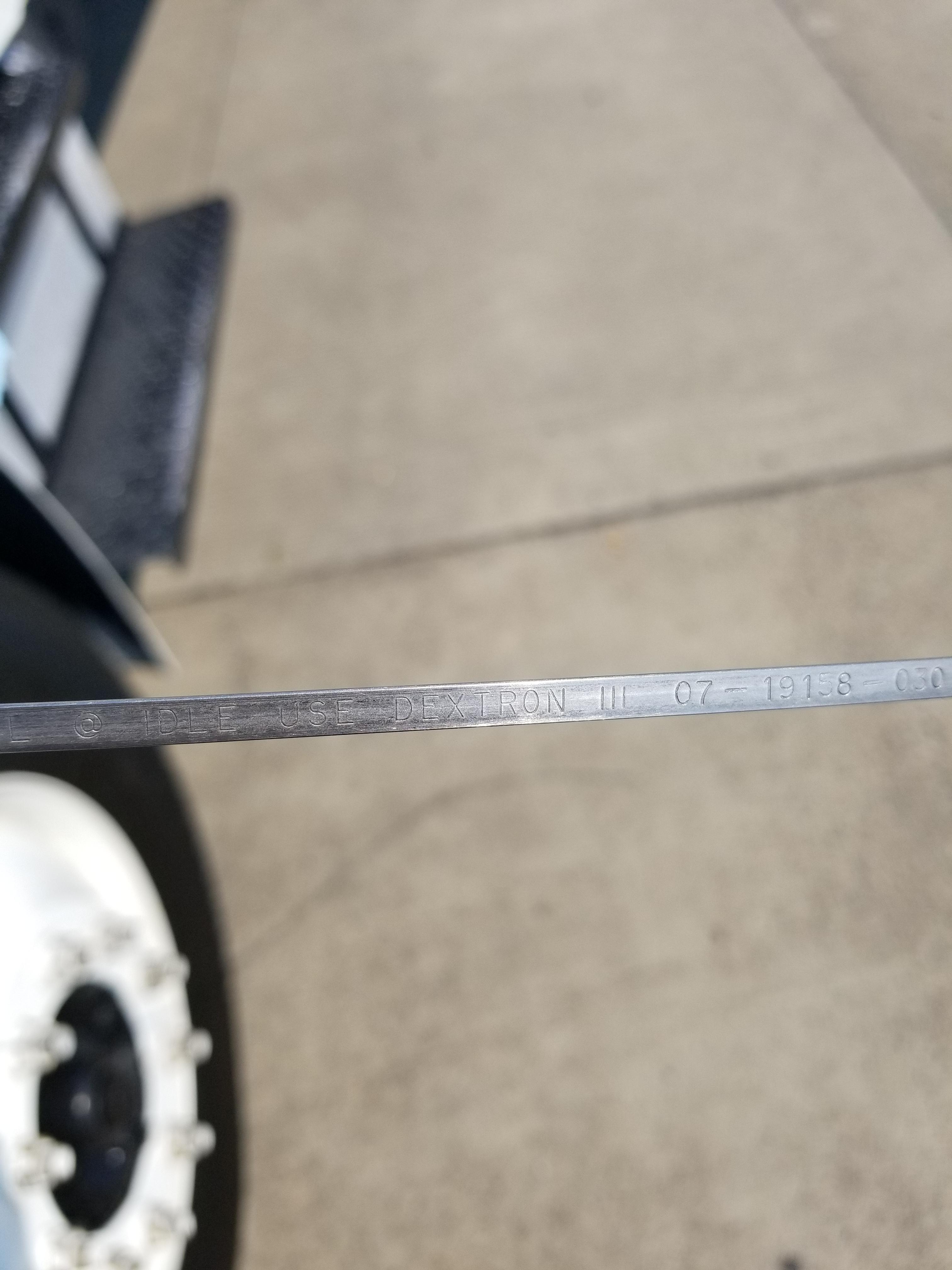 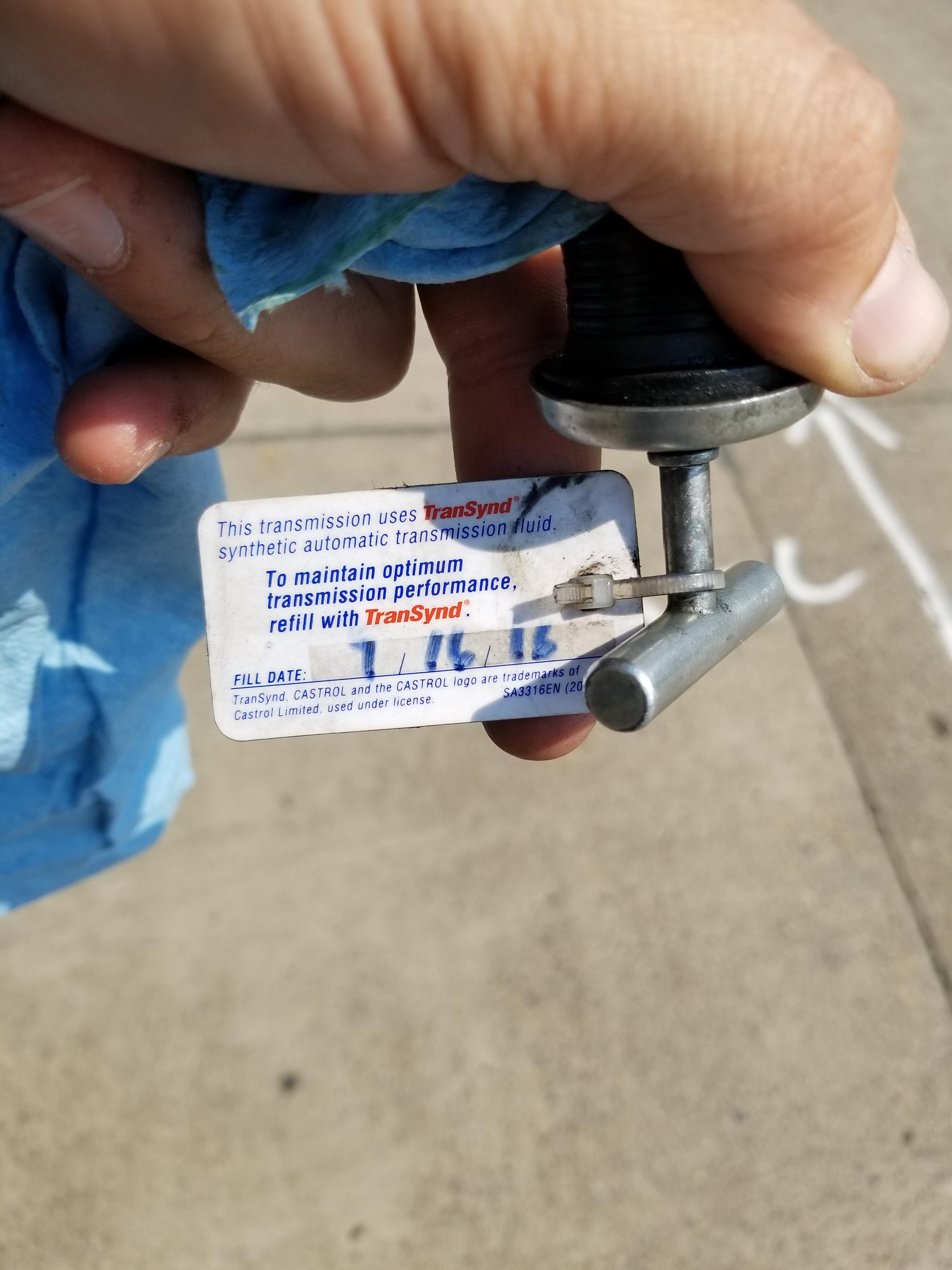 4) What type of fluid you are running Transynd like you should have or did somone get cheap and fill it with Dextron. Dextron is still ok but it dose not perform and protect as good as Transynd. Filled with TranSynd (however the dipstick says to use Dexron III - Please see attached picture)

5) What is the condition of the fluid, cherry red, slightly tinted, brown, black, smell normal or gross burnned smell. Is there bits of metal on the dipstick, how dose the fluid feel clean and smooth or dose it feel gritty, The fluid is clear brown, and smells like oil... No metal debris on the fluid. The fluid feels smooth. It does smell odd... But not outright burned.

7) Is the transmission slipping or dropping gears? Yes - While driving yesterday. Lost output to speedometer, trans light began to blink orange (CHECK TRANS). Upon starting truck in morning, very rarely it will not engage into "DRIVE" but will indicate "RANGE INHIBIT" in red on the dashboard cluster. Also, when descending a steep hill, the truck will "jump" and catch a lower gear. Seems as if it will be rolling downhill in neutral then suddenly the RPM's jump up and the trans seems to be assisting in the deceleration. It does this multiple times when descending a hill.

14) Are your cooler fins blocked up with crud, dented or flatened restricting airflow? No cooler fins visible on the outside of the pan, and according to the tech notes, inside of pan was clean of debris.

There are myriad problems with these transmissions, but often it's simple sensor or wiring problems that are relatively easily fixed.

You need an actual diagnosis.

Staff member
Mechanic
Offline
Also make sure the driveshaft is in phase. I started a thread about it recently. If this is wrong, high rates of transmission bushing wear is possible, which can exacerbate speed sensor faults.

Owner/Operator
Offline
Okay, watched the post about phasing. Incredible. This truck has not been towed under my care but likely has been before. Now, would changing tires affect this at all? (I bought truck with 4 different drive tires, I purchased 4 new michelin xdn 2's and put on it.)

Do I have to have it checked professionally?

Staff member
Mechanic
Offline
Tires will not affect it. You are capable of rephasing the shaft if it's wrong, if you have the tools. Post a pic of the shaft separated by the slip yoke, let's see if it's correct.

Owner/Operator
Offline
Got it. Pictures coming tomorrow. Thank you.

Took it to US Transmissions.

They found ECU caked with grime and not functional.

Owner/Operator
Offline
UPDATE: So it turns out all of my transmission issues were due solely to the electronic control module on the transmission.

Also, here is the video of what it was doing prior to repair:
It was shorting out. Replaced for $1,528.33 and truck shifts flawlessly and all transmission related issues are completely solved.

Thanks for the help, guys and as they say: Between the ditches and shiny side up! Haha! 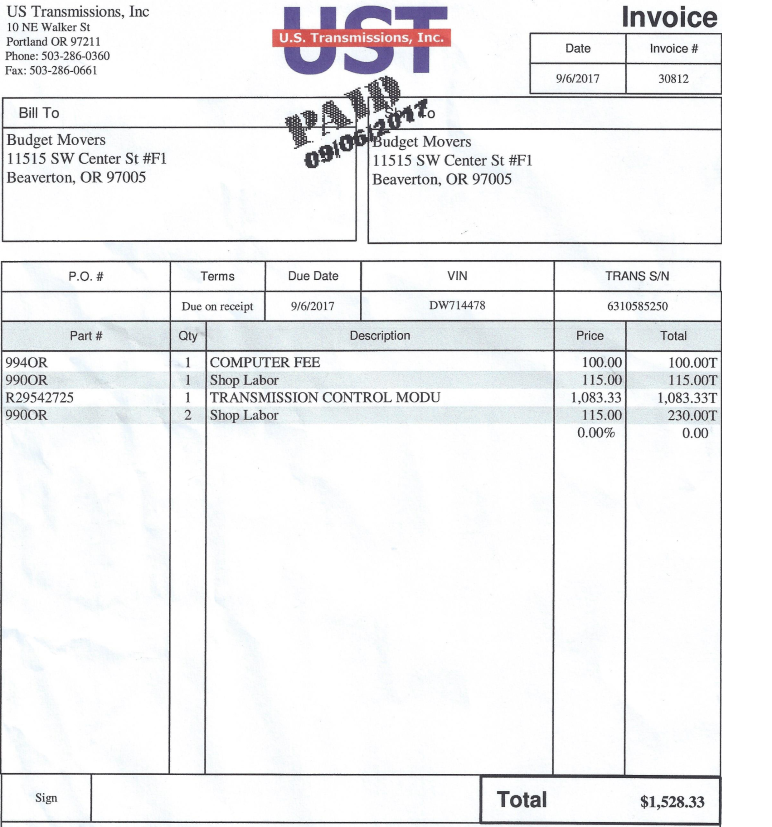 Owner/Operator
Offline
Thanks for posting the update. Helps us all learn if we actually get to see the outcome!
Reactions: BIGTRAIN